Infographic: 10 Bizarre Driving Laws from Around the World 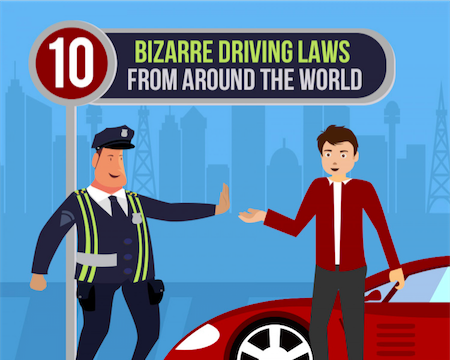 The following blog post and infographic have been provided by Southside MotorFactors, a motor parts retailer based in Dublin, Ireland.

Most of the driving laws we learn to obey are applicable worldwide – stopping at red lights, keeping within speed limits, not driving under the influence of alcohol or drugs. However, some states and countries will have a few rather perplexing rules of the road which could very easily be broken if you’re unfamiliar with the law there. That’s why it’s worth checking out the road laws of anywhere you’re visiting if you plan to drive in or through the region.

For instance, Maryland has a law where it’s illegal to swear or yell while on the road. Even if the maniacal actions of another road user understandably cause the red mist to descend, being caught could land you with a $100 fine or even90 days of jail time.

Or let’s say you’re plotting a visit to Germany, which has some of the finest roads on the planet. Their highways, which are known as Autobahns, don’t have any speed limits and carry a lot of traffic, so if you’re on one of these roads, it’s best to remain in perpetual motion. If you’re unlucky or careless enough to runout of gas on an Autobahn, you’re breaking the law and could be banned from driving in Germany. Best keep an eye on that meter, then!

Check out the infographic below for a few other unusual driving laws from around the world, including a couple which might seem insultingly obvious but have still been drafted into official law – meaning that somebody was guilty of such misdeeds before!