If you can’t avoid driving in a winter storm, here are some pointers to help you be prepared. 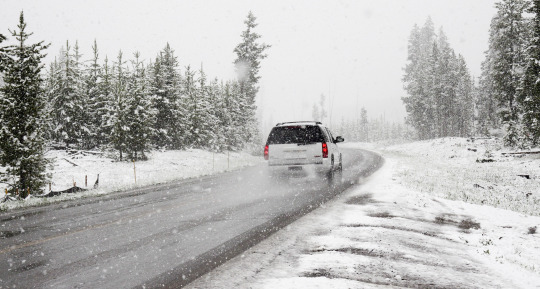 If you can’t avoid driving in a winter storm, here are some pointers to help you be prepared. You should always listen to weather reports and take them seriously, and you should make sure that your vehicle is ready. The gas tank should be full and the tires should be the correct kind to drive in the snow.

Going slowly in a snow storm can decrease the chances of losing control of the vehicle. Accelerating and decelerating at a slow pace is the best way to get traction and not slide all over the place. You should give yourself plenty of time to get where you need to go and take your time driving on the roads.

When other people are on the road too, staying as far back as possible is a good idea. You have no way of knowing what the person in front of you is going to do. It is best to give yourself plenty of time to react to the driver in front of you. You should also try to look ahead as far as possible.

Hills and snowstorms are not a good combination. When approaching a hill, you need to let the vehicle get enough inertia before the hill to go up without using the gas too much and spinning the tires out. Don’t stop in the middle of going up a hill. This can lead to sliding backward or even flipping if the hill is steep enough.

Exit ramps do not normally get the same anti-freeze agents put on them as the main highways and interstates do. They might be icier than the main roads and it is a good idea to slow the vehicle down before reaching these ramps to keep as much control as possible.

Four-Wheel drive does not mean anything on the ice. Those vehicles are good for the snow and give some extra control in snow storms, but if they hit the ice, they can lose control just like any other vehicle. Do not get too much of an ego and over comfortable because a vehicle is a four-wheel drive snow machine. You need to be careful, no matter what kind of vehicle you are in.

Eighteen wheelers don’t stop because someone cut in front of them in a snowstorm. They will slide faster and longer than lighter weight vehicles. You should avoid swerving in and out of in front of them or cutting them off. That could mean getting your vehicle smashed by these larger trucks.

There are a few simple things that you can do to improve your safety and to be prepared in case of an emergency. Nobody ever plans on being stuck in a ditch, in a snowstorm, with their car covered in snow, and a dead cell phone. However, it happens and you can be prepared to survive these situations.

The first aspect of driving in a winter storm is safety. Preparing the vehicle before winter is the best way to be safe. Winterizing vehicles or checking the whole system over is a good idea.

Things that should be checked on a vehicle before winter:

• Tires/Snow Tires - if they are available should be put on in areas where people are going to be driving in snow all winter.

Being prepared can mean the difference between life and death in an emergency. Simple items can do the job and truly be lifesavers. You should get a few emergency items in their vehicles before the winter storms hit. If you still have items in your vehicle from the previous winter, inventory should be taken to make sure the essentials are still there and ready to go.

• Flashlights (two of them in case one does not work or dies). They can be used not only for light but to signal other drivers that someone is in a ditch. Cars get covered in snow quickly and become invisible to other drivers in deep snow.

• Cell Phone Charger. Several stores are now selling chargers for cell phones that don’t have to be hooked up to a power source.

• Snow Boots. These are needed in case someone has to walk to get help.

• Food or Nutritional Drinks. Anything that does not take up a lot of space but is a high-calorie food in case the person is stranded.

• Flares. These are needed in case the driver needs to get the attention of oncoming traffic or people far away. Pieces of bright colored material can also be used to flag people down in the snow.

• First Aid Kit. This should not just be a few band aids. Most home improvement stores sell the real first aid kits that someone could use in an accident.

• Cups. Cups can be used to melt snow in and drink it to avoid dehydration from setting in.