A whirlwind tour of our nation's capital 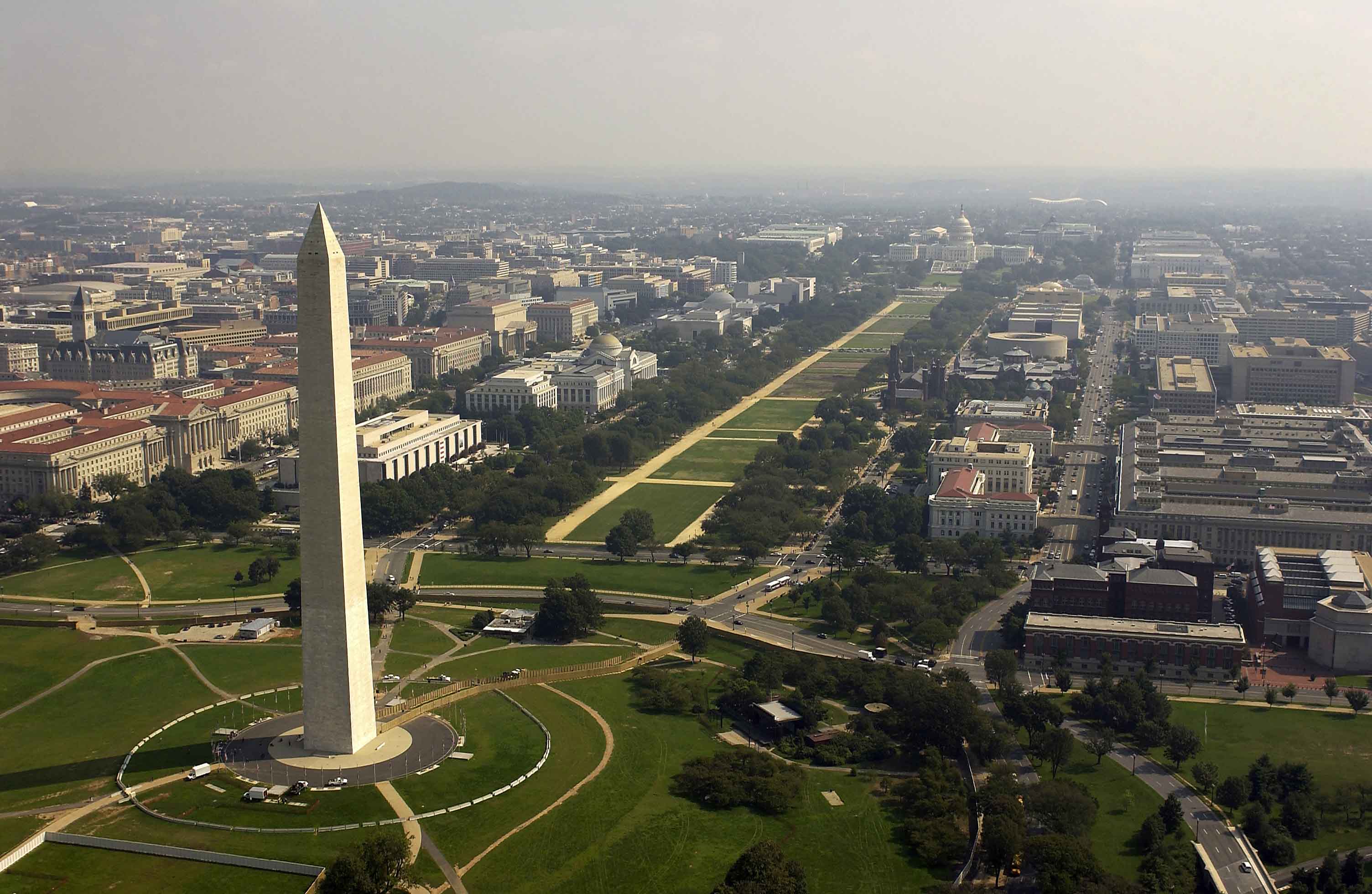 The nation’s capital is a favorite travel destination, especially in the spring and summer. The cherry blossoms are blooming, the warm sun dances on the tidal basin and reflecting pool, and there’s an event for every day of the week. From music festivals and farmer’s markets to the typical tourist attractions, Washington, DC has a lot to offer.

Not only is DC full of fun events and new adventures, the city offers some of the nation’s premier historical and educational attractions. The 3-day weekend in honor of Memorial Day is a perfect chance to come and visit the monuments and memorials around the city, which we’ll focus on in this installment of The Destination. So pack up the kids, the car, the pooch, and your favorite summer attire because Capital City is the perfect weekend getaway. President Obama himself is practically inviting you to visit!

The famous obelisk was built to honor George Washington. Washington was not only the first president of the United States of America, but also served as Commander-in-Chief of the Continental Army during the American Revolutionary War. Crowds flock to the grounds of the monument while visiting the mall, and the inside is open to visitation for those who obtain a ticket.

This monument to the 16th president of the United States of America, Abraham Lincoln also sits on the National Mall just off of the Potomac River.  The over-2,000-foot-long Reflecting Pool Lincoln overlooks is the largest in Washington, DC. Dedicated in 1922, the memorial has been the site of many significant cultural events including Martin Luther King, Jr’s famous 1963 “I Have A Dream” speech.

Even if you’ve been to DC before, this memorial is worth a road trip. A relatively new face in West Potomac Park, the Memorial opened in 2011 to honor Martin Luther King, Jr., who fought for civil rights and racial equality. Stunning in both size and symbolism, the structure sits on the Tidal Basin which provides a beautiful view when the weather is right.

Situated between the Washington Monument and the Lincoln Memorial Reflecting Pool, the World War II Memorial honors not only the servicemembers of the Armed Forces who fought in the war, but also those who served at home as well, and memorializes those whose lives were lost. Surrounding a spectacular fountain, 56 columns stand together just as the 48 states, 7 U.S. territories, and the District of Columbia stood united at wartime. Twenty-four bas-relief panels depict scenes from this time in American history. The wall of stars - 4,048 total - is a tribute to the more than 405,000 American lives sacrificed.

This memorial is one of the more unique features of the National Mall. Though the memorial includes three parts - the wall, “The Three Servicemen” statue, and the Vietnam Women’s Memorial, the wall is the most striking. Two 246-feet-long walls of dark stone meet at an angle of 125 degrees. Located to the northeast of the Lincoln Memorial, the walls are over 10 feet tall where they meet, and slowly taper down to 8 inches on either end. Inscribed on the Vietnam Veterans Memorial wall are over 58,000 names of servicemen who were killed or went missing in action during the Vietnam War.

To the southeast of the Lincoln Memorial is the Korean War Veterans Memorial, comprised of 19 stainless steel statues and a 164-foot mural wall. The statues stand approximately 7-feet tall among patches of Juniper bushes. The troops, designed to be ethnically representative, are each designated by and designed to reflect a specific duty, race, and weapon. The memorial recognizes the more than 5 million Americans who served in the Korean War.

Various Smithsonian Museums line the National Mall between the United States Capitol building and the Washington Monument - and there are even more scattered around the District! For Memorial Day specifically, we recommend the American History Museum. The Star-Spangled Banner exhibit permanently displays the flag that was flown at Fort McHenry in 1814, inspiring Francis Scott Key to pen the words that would become our national anthem. The Price of Freedom: Americans at War explores American military history and the impact of war on not only members of the Armed Forces but domestic America.

The District of Columbia is also home to a variety of museums dedicated to various branches of the military, specific wars, or divisions of servicemembers. The National Guard Memorial Museum is located just to the west of Union Station, and is free and open to the public. The National Museum of the U.S. Navy is located in the Navy Yard neighborhood of Washington, DC and is open only to those who have - or who are escorted by - someone with a proper military or Department of Defense ID.

The United States Holocaust Memorial Museum serves as the official U.S. memorial to the holocaust, with hours worth of history to experience inside. The National Museum of American Jewish Military History is dedicated to preserving the history of Jewish service people, and features a permanent exhibition on Jews in the American Military. The International Spy  Museum is quite popular and exciting but does require purchased tickets.

No trip to the nation’s capital can be complete without a trip to the White House! Perhaps the most famous house in America, the President of the United States lives and works here. Tours can be arranged through your Member of Congress, but most people are content to hang around in Lafayette Square and on Pennsylvania Avenue across from the North Lawn. There’s always plenty of tourists, and often you’ll catch protesters or political activists exercising  their democratic rights. Maybe you’ll even catch a glimpse of Sunny and Bo!

The Naval Observatory consists of four scientific departments that perform essential functions for the Department of Defense, including determining the precise locations of various celestial objects and determining exact time. The USNO maintains the Master Clock, and the exact time can be seen from a large digital clock near the entrance to the Naval Observatory on Massachusetts Avenue. The Vice President’s home is also located on the grounds. Tours are available on a limited basis, but the schedule is full for this summer.

The U.S. Capitol Building is not only the meeting place of Congress, but a national monument and symbol of American democracy. Visited by millions every year, the Capitol Building offers a Visitors Center - accessible on the East side of the building - and free guided tours of the building. In addition to exhibits on Congress and the Capitol, the building is home to a collection of art. To watch Congress in session, visitors must obtain a pass from one of their Senators or Representatives.

Supreme Court of the United States

The United States Supreme Court Building is home to the highest court in the United States of America. The building is open to the public, but not on weekends or Federal Holidays. Courtroom Lectures are free and introduce the public to the Court, a 24-minute film for visitors is show continuously in the ground floor theatre from 9:15AM to 3:45PM daily, and several exhibitions explore the history of the SCOTUS. Oral Arguments are open to the public on a first-come, first-serve basis.

The Library of Congress is the largest library in the world, and its collections are home to millions of items. Several different tours are offered, or visitors can explore the Thomas Jefferson Building and its exhibits at their leisure. Certain buildings comprising the Library of Congress and its reading rooms may only be open to researchers at certain times. The Library hosts a variety of public events.

The Arlington National Cemetery and The United States Marine Corps War Memorial are technically in Arlington, Virginia. It’s just over the Potomac, however, and each is worth a mention in honor of Memorial Day. The cemetery even has a dedicated Metro station, and the memorial is about a 15 minute walk away.

Arlington National Cemetery was actually the site of the very first Memorial Day - then called Decoration Day. The cemetery hosts an annual National Memorial Day Observance and also offers the opportunity to visit the gravesite of President John F. Kennedy and the Tomb of the Unknown Soldier. The United States Marine Corps War Memorial (commonly called the Iwo Jima Memorial) is based on the powerful 1945 photograph taken of U.S. troops raising the American Flag on Mount Suribachi. The U.S. Marine Corps holds Sunset Parades at the memorial on Tuesdays during the summer.

Want to experience the city like a real Washingtonian? Or maybe you’ve been to DC before and want to see the city in a new light. Here’s a couple easy tricks:

If you’re not into the tourist attractions, want to avoid the crowds, or have already been to all the Smithsonians, check out some of the hipper DC neighborhoods, all of which have plenty to offer.