In our recurring feature "The Journey," we highlight scenic and interesting drives that can be made in a weekend. 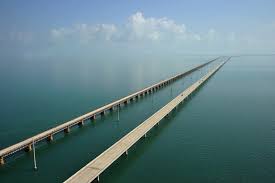 The Overseas Highway is among the most beautiful stretches of road in the United States, and it's frequently named one of the most scenic drives in the world. First completed in 1912, this 113-mile highway carries U.S. Route 1 over breathtaking coral and limestone islets through the Florida Keys.

From Miami, take the Florida Turnpike until it ends and then get on U.S. 1. There are five regions in the island chain of the Keys: Key Largo, Islamorada, Marathon, Big Pine Key, and Key West.

The largest of the Keys, Key Largo features the John Pennekamp Coral Reef State Park, the first undersea park in the States. Visitors to the park can explore the coral reefs and associated marine life by a glass-bottom boat tour, or by a scuba diving or snorkeling tour. Key Largo is also known for its dolphin encounter program facilities, such as Dolphin Cove.

Known as the "sportfishing capital of the world," Islamorada is a major destination for anglers. Its waters teem with sailfish, tuna, and kingfish, and it's also home to a thriving restaurant scene.

This group of islands offers some amazing views; one of the best sights here is the Seven Mile Bridge, which separates the Middle Keys from the Lower Keys. The largest segmental bridge in the world, it is featured frequently in American movies, and it's truly breathtaking to behold. Marathon is another hotspot for dolphins, and there are a number of facilities that offer visitors a chance to swim and interact with them.

At Bahia Honda State Park, visitors can enjoy gorgeous beaches and excellent snorkeling. Travel experts call it one of the best beach locations in the United States, and admission is free.

Big Pine Key boasts the Looe Key National Marine Sanctuary, a U-shaped "groove and spur" reef that is great for shallow water diving. You'll spot a wide range of marine wildlife, such as yellowtail, angelfish, parrotfish, barracuda, sergeant majors, and moray eel. If you're an experienced, advanced diver, you can also check out the Adolphus Busch, a 210-foot freighter wreckage that has been prepared as a diving attraction.

Key West is the final stop on the Overseas Highway, and it's also the southernmost point in the continental U.S. The former home of Ernest Hemingway, Tennessee Williams, and Robert Frost, the city is a literary mecca, with more writers per capita than any other city in the country. It was one of the first places in the Keys to be dived, and its abundant corals and fish make for great shallow water dives.