When You Get Pulled Over

How to Get Through the Dreaded Traffic Stop 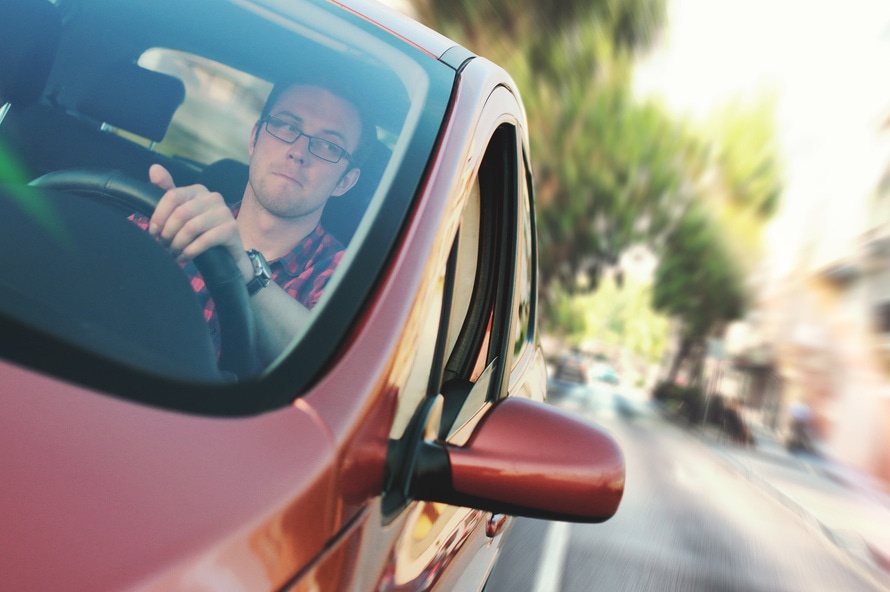 Were you speeding? Run a light? Ignore a stop sign? Maybe you just have a taillight out. Whatever the reason, you’ve been flagged down by an officer of the law and asked to move to the side of the road via the ubiquitous signal of a siren accompanied by flashing red and blue lights.

So what do you do when you see the squad car and it’s lights in your rearview mirror? We’ve designed a guide to assist you in making it through the dreaded traffic stop.

This one should be common sense. When signaled by a police officer, you must pull off of the road and stop your car at your earliest convenience. Indicate your intentions to the officer following you using your blinker, and pull over as far to the right as you can, in order to give the officer ample room to approach your vehicle without having to step into oncoming traffic.

If you don’t feel safe pulling over where you are, or you are unsure if an unmarked car attempting to stop you is a law enforcement officer, put on your hazards and acknowledge that you see them. Find the nearest safe and well-lit or well-populated where you can pull off the road. You may even want to call 911 to double check if an unmarked car is in fact an officer pulling you over, and have the dispatcher inform the officer that you’re aware of them and plan to pull over when safe to do so.

When you pull off the road, pull over far enough that the officer will not have to stand in oncoming traffic. Put the car into park and turn off the engine. Turn off the radio or any other audio that you have running, and roll down the window. If it’s dark, turn on the lights inside the car so the police officer can see you and anything going on in the vehicle. Be sure you’re wearing a seatbelt and put your hands on the steering wheel.

Admittedly, this is awfully hard to remember in the moment. Take a deep breath. This is a setback, sure. A bump in the road, so to speak. You were likely going somewhere but we promise, being late is not the end of the world. A ticket certainly sucks, but no one was hurt, right? Maybe you’ll get off with a warning anyway. The point is: it’s unsettling to be pulled over, just as any unexpected incident is a little unsettling, but more likely than not, you will get through this okay.

Take a moment to consider that the officer is ultimately just another person, going about their day just as you are. Almost everyone has heard horror stories of traffic stops gone wrong and ending up injurious or fatal for one party or the other. So often both driver and police officer are nervous about what may happen during this interaction. Remember that they’re armed and trained to protect themselves. Try to remain calm and speak to the officer as you would anyone else.

You may do well to avoid sudden movements and to refrain from reaching for anything until the officer asks you to do so. A quick sudden reach for something out of sight may lead the officer to fear you’re reaching for a weapon. On that note, it may help you - and in some states you may be legally required - to disclose the presence of any weapons you may have on you or in the car.

If you don’t believe you were breaking the law or you plan to dispute a potential ticket, you don’t want to admit to having committed a crime. As the saying goes, anything you say may be used against you in a court of law. The burden of proving you committed a crime is on the officer; but if you admit guilt they have their proof. That being said, being rude or ornery isn’t likely to help you out in the moment, and could ultimately lead to additional charges depending on the circumstances and state law.

It stands to reason that officers are more likely to let you off with just a warning - depending on the infraction - if you’re kind to them. Little things go a long way, like using an even tone of voice and addressing the cop respectfully. Using words like “officer,” “sir,” or “madam” can help, and following their directions will also show respect. Let them do most of the talking, but answer their questions - if you need to avoid incriminating yourself, respond noncommittally or verbally invoke your 5th Amendment rights.

Accept Your Fate (for the Moment)

Arguing with the police officer or trying to fight the ticket then and there roadside is almost definitely not going to get you anywhere. Instead, do as the cop asks and accept the citation if they issue you one. The place to fight it is in court. Before leaving the scene, take a moment to settle yourself and prepare yourself to drive before carefully pulling back into traffic.

Regardless of whether or not a crime was actually committed, drivers have certain rights during a traffic stop. Depending on your state’s laws, you may be required to provide certain information to police during a traffic stop, and to provide identification information if the police have a reasonable suspicion of criminal activity. Otherwise, you have the right under the 5th Amendment to remain silent. You do not have to consent to a search of your person or vehicle, but police officers have the right to search both you and your vehicle without consent if they have probable cause. There are a variety of resources available online to learn about what is and isn’t legally permissible when you’ve been stopped by the police, but it may be wise to educate yourself on your state’s laws and pay attention to recent federal legislation and court rulings that may impact both policy and practice.

Overall, it’s important to remember that whether or not the traffic stop is legitimate, doing everything you can to create a frictionless experience will likely result in a better outcome. In a best case scenario, an officer may let a small infraction slide if you demonstrate respect and lead them to believe that you’re otherwise a law-abiding citizen. In a scenario where you feel you were wrongfully detained or charged, you have a much better chance of dealing with that after the incident has concluded.

Of course, the best way to handle a traffic stop is to never get caught up in one. It’s not always avoidable, of course, as people are pulled over for all sorts of reasons. But taking care to follow traffic laws and stay up to date on required car maintenance and paperwork like registration and insurance will decrease the likelihood of looking up to find those lights in your rearview mirror, and will help you avoid additional trouble if you do get pulled over.